ROLE OF THE OFFICE 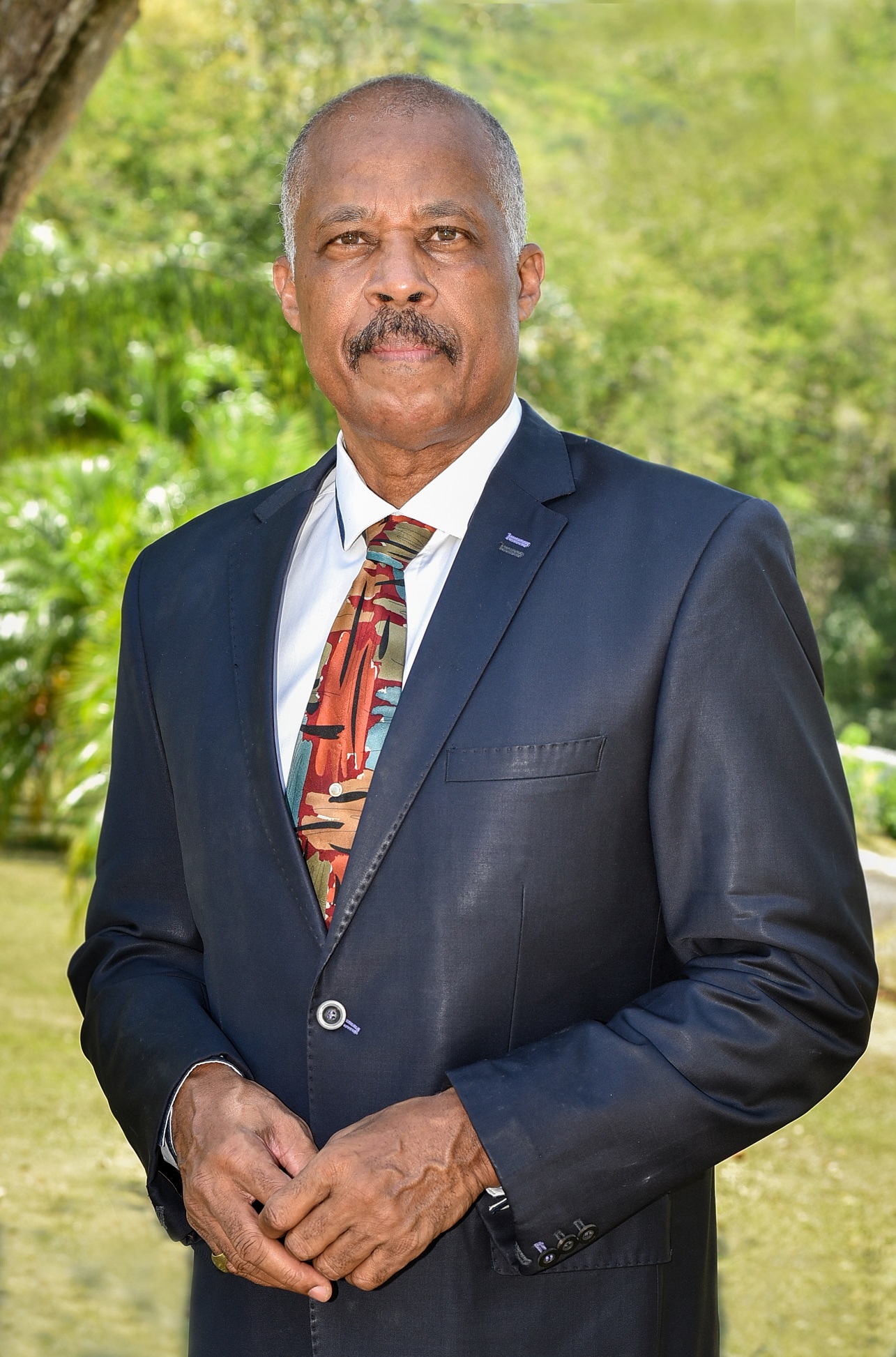 Professor Sir Hilary Beckles, 8th Vice-Chancellor of The University of the West Indies (The UWI) is a distinguished academic, international thought leader, United Nations committee official, and global public activist in the field of social justice and minority empowerment.

Sir Hilary received his higher education in the United Kingdom. He has lectured extensively in Europe, the Americas, Africa and Asia, and has published over 100 peer reviewed essays in scholarly journals, and over 13 books on subjects ranging from Atlantic and Caribbean History, gender relations in the Caribbean, sport development and popular culture.

After graduating in 1976 with a BA (Hons) degree in Economic and Social History from The University of Hull, and a PhD from the same university in 1980, Sir Hilary joined The University of the West Indies. His distinguished record of published research, propelled him to the rank of Reader, and at the age of 36, he became the university’s youngest scholar to be promoted to a personal professorial chair. Shortly thereafter he won the inaugural Vice-Chancellor’s Award for excellence in the field of research. Before assuming office as Vice-Chancellor in 2015, he served the university as Professor of Economic History, Pro-Vice Chancellor for Undergraduate Studies, and Principal of its Cave Hill Campus in Barbados for thirteen years (2002-2015).

Sir Hilary has had widespread Caribbean and global recognition for his academic achievements and leadership expertise. He was called upon by former UN Secretary-General Ban Ki-Moon to serve as an inaugural member of his Science Advisory Board on Sustainable Development. He also served as an advisor to UNESCO’s Cities for Peace Global Program, and was an advisor to the UN World Culture Report. He is also a consultant for the UNESCO Cities for Peace Global Programme.

After years of critiquing UNESCO’s highly respected eight volumes series, The General History of Africa, for its inadequacy as a reference in respect of African Diasporas in Europe, the Middle East, Asia, and the Americas, he was appointed an Editor of the 9th volume which is conceptualized around the theme “Global Africa”.

In 2013 Sir Hilary was selected by the Heads of Government of the Caribbean Community (CARICOM) to be the inaugural Chair of the CARICOM Reparations Commission—which coordinates the Caribbean governments’ policy positions on the global reparatory justice conversation, and globally promotes reparations for native genocide, African enslavement and colonization. Under his guidance, the Centre for Reparations Research at The UWI was established to lead the implementation of CARICOM’s Reparatory Justice Programme.

Sir Hilary has served as an associate member of the London University Legacies of Slavery Project, and the University of Hull’s ‘Wilberforce Institute for Slavery and Emancipation’. Sir Hilary shaped the architecture which brought to fruition the first-ever Caribbean Reparatory Justice initiative as a development framework, via a 20-year commitment of a £20 million investment between The UWI and Glasgow University in Scotland to create the Glasgow-Caribbean Centre for Development Research.

For his outstanding academic leadership and public advocacy, in 2015 Sir Hilary was invited by the President of the UN General Assembly to deliver the feature address during the sitting in which the period 2015-2024 was declared the UN Decade for People of African Descent. Further, in his advocacy for reparatory justice, Sir Hilary has been invited to speak before the United States Congressional Black Caucus, the British House of Commons, and the European Parliament on the right to Reparations.

He has sought to push the frontiers of knowledge, and through his publications, initiate new fields of enquiry. His book “Natural Rebels: A Social History of Enslaved Black Women in Barbados and the Caribbean” (Rutgers University Press/Zed Book, 1989) was the first major study of enslaved women in Atlantic slave societies. This was followed by “Centering Woman: Gender Discourses in Caribbean Slave Societies” (James Currey Press/Ian Randle Publishers, 1999). His “White Servitude and Black Slavery: White Indentured Servitude in the Caribbean, 1627-1715: Tennessee University Press, 1989) was the first major study of the oppressed landless British working class who were a critical part of Empire and of the slave societies of the British Caribbean. In 2016 he published another seminal monograph: “The First Black Slave Society: Britain’s Barbados, 1627-1876”, which locates Barbados as the first African majority society in the Atlantic world, and a slave society best described as “Made in Britain”.

Likewise, his seminal study, “Britain’s Black Debt: Reparations for Slavery and Native Genocide in the Caribbean” (UWI Press, 2015), is an economic history of the rise of British Capitalism in the 17th to 19th centuries that provides the evidentiary basis of the claim for reparatory justice for the genocide of the native community, the globalization of African enslavement, and the deceptive indenture of Asians that followed, described as “three acts of a single play”.

Following CLR James, he turned to cricket culture and in an attempt to update the Jamesian analysis, published a two volume study of the rise and fall of West Indian international performance—“The Development of West Indies Cricket: Volume 1: The Age of Nationalism; and Volume 2: The Age of Globalization (Pluto Press, 1999). This work was described in Wisden Cricket Monthly, August 1999, as “arguably the most important cricket book ever published”. In 2017 he followed this up with “Cricket without a Cause: The Fall of the Mighty West Indian Test Cricketers” (Ian Randle Publishers, 2017).

His other publications include The History of Barbados (1990); The Brain Train: Tertiary Education Thinking and Planning in the Caribbean (2002); and A Nation Imagined: The First West Indies Test Team: The 1928 Tour (2003).

In 2007, he received a knighthood, Commander Knight of St. Andrew (KA), the highest national honour in Barbados, “in recognition of his distinguished service in the fields of Education, Sports and the Arts”. In 2015 he was honoured by the Borough of Brooklyn, New York, for “extraordinary achievement, outstanding leadership, and contribution to the community”. That same year, he also received the Second Global Community Healer Award for humanitarian work from the Community Healer Network, Washington DC, following the legendary Maya Angelou. In 2016 he received the Sisserou Award of Honour from the Government of Dominica, for “his contribution to the Commonwealth of Dominica and the region in the field of Education”. In 2017, the Town of Hartford in the state of Connecticut, declared 21st March, Sir Hilary Beckles Day in recognition of his global contribution to social justice and human equality. He is also the recipient of the prestigious Amistad Award from Central Connecticut State University, honouring “his outstanding contributions to historical knowledge and the struggle for human rights”. In August 2020, Sir Hilary was named a Paul Harris Fellow by the Rotary Foundation, in recognition of his “extensive work as a thought leader in the field of social justice and minority empowerment.” In January 2021, Sir Hilary’s global advocacy for reparatory justice, equality and economic development for people of the African diaspora was recognized with the conferral of the Martin Luther King Jr 2021 Global Award for Peace and Freedom by the US National Action Network (NAN).

Amid all of this, Sir Hilary is an accomplished playwright with six of his staged works receiving popular acclaim in the Caribbean. These plays bring to the stage seminal moments in Caribbean and Atlantic history, written in consultation with the late Derek Walcott and Prof. Ralston ‘Rex’ Nettleford.

As Vice-Chancellor of The University of the West Indies, Sir Hilary conceptualized the university’s Triple A Strategy which is committed to leveraging the resources and capabilities of the university in the quest for the revitalization of Caribbean development. The strategic plan is built upon the pillars of Access – increasing participation in higher education for all; Alignment – creating value-added relationships with partners to ensure that the university meets the needs of the community it serves; and Agility – creating an entrepreneurial university with a diverse revenue base, global presence, operational efficiency and financial stability. Under his leadership the fifth Campus of The UWI, the Five Islands Campus was birthed to address the growing concern about the underserved communities in the Eastern Caribbean (OECS). His stewardship was vital in the university’s debut into the prestigious Times Higher Education (THE) Ranking, in which it was ranked in the top 4% of the world’s best universities, and in 2020 earned the triple first accolade – as the number one university in the Caribbean, among the top 1% in Latin America and top 1% of worldwide universities between 50 and 80 years old. Sir Hilary has spearheaded an aggressive global strategy, which has resulted in joint institutes such as the SUNY-UWI Centre for Leadership and Sustainable Development, based in New York; the University of Lagos (UNILAG)-UWI Institute of African and Diaspora Studies in Nigeria; The UWI-China Institute of Information Technology in Suzhou, China; the Institute for Global African Affairs with the University of Johannesburg in South Africa; Strategic Alliance for Hemispheric Development with Universidad de los Andes (UNIANDES) in Colombia; the Canada-Caribbean Institute located at Brock University; The UWI-University of Glasgow Caribbean Centre for Development Research; The UWI-University of Havana Centre for the Sustainable Development of Caribbean People in Cuba; and The UWI-Coventry Institute for Industry-Academic Partnership with the University of Coventry. The UWI has been applauded by THE, for the spectacular speed with which this was achieved, noting that: “The UWI has done in a few years what other universities have taken decades or centuries.” Sir Hilary has also forged strategic industry partnerships to allow for the widened penetration of The UWI brand through new media channels. Today, the university operates a one of a kind multimedia, public information and education service – UWItv – providing 24/7 cable channel content from the regional university.

In March 2021, the United Nations invited Sir Hilary to serve as an expert for its “Futures of Higher Education Project”. Led by the UNESCO International Institute for Higher Education in Latin America and the Caribbean (UNESCO-IESALC), the project is intended to “generate innovative and visionary ideas about the purpose and functions of higher education.”