Given the distinctive strategic role the University plays in providing the technical expertise and climate action advocacy, it continued to be active in addressing the threat of climate change to the region.

The State of the Caribbean Climate Report

The UWI's State of the Caribbean Climate Report, released in November 2020, provided critical analysis and discussion on Caribbean climate, variability, trends and projections. It was produced with grant funding from the ACP-EU-CDB Natural Disaster Risk Management in CARIFORUM Countries programme (NDRM), which is funded by the EU and managed by the CDB. 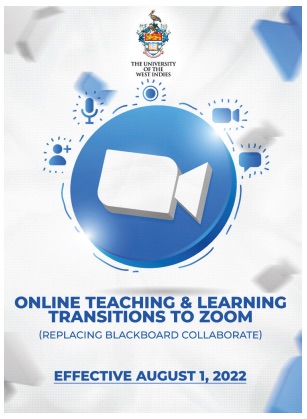 Professor Michael Taylor, Dean, FST and co-Director, CSGM, described the report as “a review document of authoritative works and recent studies on climate change, climate variability and climate impacts specific to the Caribbean and a first stop reference to climate information for the Caribbean.”

At the UN COP26 summit on Climate Change, The UWI was centre among many of the major conversations given its distinctive strategic role in providing the technical expertise and climate action advocacy for the Caribbean region.

The UWI currently serves as the global leader mobilising the International Association of Universities’ Global University Consortium for on SDG 13 (Climate Action) and has a leading role in a specialised network known as the Commonwealth Climate Resilience Network (CCRN) — established by the Association of Commonwealth Universities. The UWI was recently invited to become a member of the International Universities Climate Alliance (the Climate Alliance). Established in 2020, it includes 48 world class climate research universities across 21 countries globally. The UWI joins the Alliance, sharing in its vision to be ‘a global source of trusted communication on scientific research and evidence- based practice on climate change science, impacts, adaptation and mitigation’, and supporting its series of public events and outreach focussed on helping the public understand the IPCC reporting and policy commitments in the lead up to and beyond COP26.

“The outcomes from the November 1-12 COP26 can have profound impacts on our Earth as we know it, and many view it as the last best chance for political leaders to avert a climate catastrophe, which would be unavoidable if global warming exceeds 1.5°C,” says Professor Michael Taylor, Climate Scientist and Dean of the Faculty of Science and Technology at The UWI Mona Campus and co-leader of the Climate Studies Group at Mona (CSGM). Over the months leading up to COP26, he and Professor Tannecia Stephenson, who is Head of the Department of Physics at The UWI Mona and co-lead for the CSGM, were the lead technical experts among a CARICOM team preparing the key issues and positions that the 15-member group highlighted at the COP26. Professor Stephenson also presented on Small Island Science at the COP26 Science Pavilion Event being organised by the Intergovernmental Panel on Climate Change (IPCC).

Another UWI Environmental Scientist, Dr. Hugh Sealy, had particularly significant roles at COP26. He served as the technical lead of the Barbados delegation. He was also the lead negotiator for the Alliance of Small Island States (AOSIS), charged with coordinating AOSIS positions on matters related to raising the mitigation ambition of all countries to limit global warming to less than 1.5 degrees Celsius, and a co-facilitator of the negotiations under Article 6 of the Paris Agreement. Other UWI experts who participated in virtual events related to the COP26 summit included Professor John Agard, a leading scientist at The UWI St. Augustine, Professor of Tropical Island Ecology and Executive Director of the University’s Global Institute for Climate- Smart and Resilient Development, as well as Dr. Donovan Campbell, a Senior Lecturer and Head of the Department of Geography and Geology at the Mona Campus.

Providing the best scientific research to tackle climate change has long been a priority for The UWI; the regional university’s scientists have been sounding the alarm for almost five decades. Thirteen UWI scientists have contributed to the IPCC Sixth Assessment cycle to produce the three-volume global assessment report, known as “The Sixth Report” and “Three Special Reports”, which were presented at COP. As the Caribbean’s leading university, The UWI has a distinctive strategic role in providing the technical expertise and amplifying the advocacy needed for the region.

According to Dr. Stacy Richards-Kennedy, Pro Vice- Chancellor for Global Affairs at The UWI, “Strengthening research, innovation and the science-policy interface so that knowledge produced by universities can be translated into policy and practice is one of the most significant contributions that The UWI makes to advancing SGD-13 (Climate Action). We have heard the clarion call of our UWI scientists and our governments. Our region is on the frontline and faces disproportionate levels of vulnerability and risk, but we cannot solve the climate crisis alone. What is urgently needed is moral and decisive leadership, increased financing for small island developing states and demonstrated collective action,” she said.

The COP26 Futures We Want project

The COP26 Futures We Want project released its findings just before the start of the international climate summit in Glasgow. These visions, commissioned in 2021 by the UK in their role as COP26 President, aim to explore what the future could look like in a climate-resilient, net-zero world.

They highlight some of the innovations that could make this future a reality, and explore what science can tell us about the wide-ranging benefits of achieving this future.

The visions cover a series of cross-cutting themes and six regions: the Arabian Peninsula (specifically focused on the Kingdom of Saudi Arabia and the United Arab Emirates), Brazil, India, Jamaica, Kenya, and the UK. They were chosen to reflect the diversity of challenges and opportunities in building a sustainable future.

The regional profile for Jamaica developed with input from our UWI academic experts Professor Michael Taylor, Dr. David Smith and Mr. Rajne Reynolds sets out a synthesis of the available evidence based on regional challenges and opportunities for mitigation, adaptation, and resilience measures associated with climate change and a global transition to an inclusive, desirable, and resilient net-zero future.

The UWI launched its Global Institute for Climate-Smart and Resilient Development (GICSRD) on October 7, 2021, just a month ahead of COP26. The Institute, a manifestation of the One UWI philosophy, is the first of its kind for the Caribbean virtual hub and consolidates The UWI’s research and teaching on climate change, disaster risk reduction, resilience and sustainable development.

The GICSRD is backed by high profile regional and international partner institutions such as the UNDP, Open Society Foundations and Barbados-born entertainer Rihanna’s Clara Lionel Foundation.

The UWI is uniquely positioned to lead this facility, given its collective resources and expertise based on decades of research. At the core of the new Institute’s objectives will be increasing scientific understanding of the changing climate and its impacts on regional communities and economies. It will also execute projects that promote more resilient and sustainable development.

Professor John Agard is serving as the Institute’s inaugural Executive Director. The GICSRD has received statements of support from within the region and across the globe from prominent partners who have committed funding and technical resources.

Several members of the GICSRD Management Committee were later central to discussions and events related to the COP26 summit.

Other significant areas of climate action by The UWI: