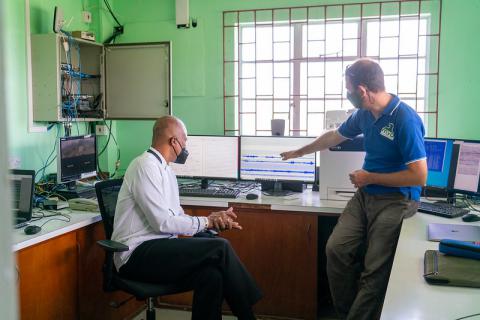 The UWI Regional Headquarters Jamaica. Thursday, May 20, 2021—Vice-Chancellor, of The University of the West Indies (The UWI), Professor Sir Hilary Beckles heard first-hand from scientists at the University’s Seismic Research Centre (UWI–SRC) about their months of treacherous work and experience, when he visited Saint Vincent and the Grenadines last Friday.

Vice-Chancellor Beckles was briefed by the scientific team, led by Volcanologist, Dr Adam Stinton on its monitoring and advising on the La Soufrière volcano, which has been critical to the Government in preparing for, managing and now recovering from the volcano’s eruption.

The visit to the Belmont Observatory was part of a tour of Saint Vincent prioritised by Vice-Chancellor Beckles immediately following the Government’s lowering of the volcanic alert level. He personally offered his gratitude to the team for its leadership and praised the scientists’ dedication and significant achievements throughout the crisis on the island.

Advice provided by the UWI–SRC enabled the successful evacuation of over 13,000 residents from the designated red and orange zones in Saint Vincent, 24 hours prior to the first explosion of the volcano on April 9. More than thirty-two discrete explosions have been observed since the onset of explosive activity. To date, there has been no loss of life.

The work of the UWI–SRC team, which has been on rotation since the onset of the volcano’s heightened activity in December 2020, demonstrates another example of The UWI's mandate of service to the Caribbean region in times of crisis. As part of its mission, the regional university is committed to providing the technical expertise and knowledge needed to support the Caribbean’s resilience to hazards and ultimately minimising the impact of natural disasters like this.

In addition to leading the science through monitoring, researching, educating, and advising, the UWI–SRC has also been providing critical communications response that has received commendation from the international volcanological community. Leading up to, and throughout La Soufrière’s explosive phase, UWI–SRC worked closely with the country’s National Emergency Management Organisation (NEMO) to help the Government and its agencies in risk communication in addition to shaping public policy and response plans.