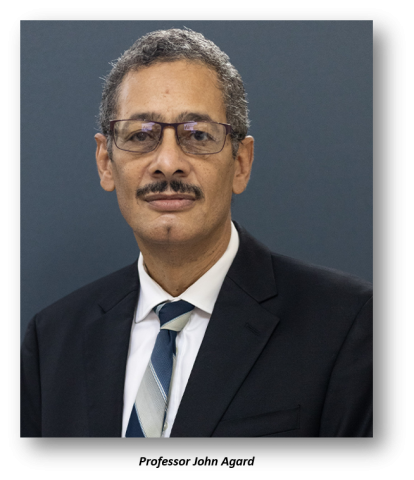 The UWI Regional Headquarters, Jamaica. Saturday, October 31, 2020— Professor John Agard, a leading scientist from the Department of Life Sciences at The University of the West Indies, St. Augustine Campus has been appointed by UN Secretary-General, António Guterres to help draft the 2023 Global Sustainable Development Report.

Professor Agard joins a diverse group of 15 independent scientists around the world, representing a wide range of disciplines, expertise and backgrounds, who will work as a team on preparing the report. He is the only scientist from the Caribbean region and will co-chair this group of eminent scholars. According to a statement from the UN Department of Economic and Social Affairs, “The Report will provide guidance on the state of global sustainable development from a scientific perspective, address new and emerging issues and challenges, and offer recommendations for action by governments and other actors.” It is the second such group and report, as mandated by United Nations Member States.

The first group released its report, entitled The Future is Now: Science for Achieving Sustainable Development, in September of 2019. The COVID-19 pandemic has since emerged, threatening decades of development progress. The next report will be developed in this context and will be published in 2023, then in September of that year, inform the high-level, global review of the implementation of the 2030 Agenda. The team will conduct its work from October 2020 until then coordinating inputs from existing networks, representing the United Nations, the private sector, civil society and academia groups.

At the international level, Professor Agard has served on a number of global working groups.  He has been a Lead Author of the UN Inter-Governmental Panel on Climate Change (IPCC) 4th and 5th Assessments and a Review Editor on the 6th Assessment Report. He also served as the Coordinating Lead Author on the Intergovernmental Science-Policy Platform on Biodiversity and Ecosystem Services (IPBES). Professor Agard serves as independent advisor on environment and sustainability policy to the Board of the Inter-American Development Bank (IDB) in Washington, DC; he has previously served as a member of the CARICOM Climate Change Task Force and as a member of the Caribbean Sea Commission formed by the Association of Caribbean States (ACS) to advance the cause of integrated management of the Caribbean Sea.

Professor of Tropical Island Ecology, Agard was Head of the Department of Life Sciences at The UWI St. Augustine Campus for six years. He is currently Director of The UWI St Augustine Centre for Innovation and Entrepreneurship. His qualifications include a B.Sc. and Ph.D. from The UWI and a Master of Science in Pollution and Environmental Control from the University of Manchester.