UWI and ACS through MOU commit to Sustainable Development, Decolonisation and Regionalism 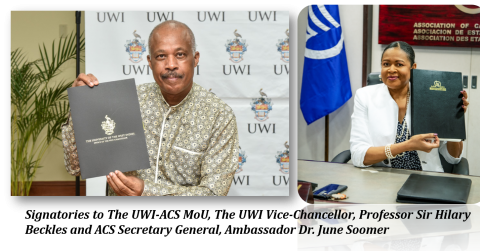 The UWI Regional Headquarters, Jamaica. Friday, October 30, 2020. — “This day we take another critical step in the deconstruction of the colonial Caribbean.”

These were the opening words of Vice-Chancellor of The University of the West Indies, Professor Sir Hilary Beckles, at the virtual signing event for a Memorandum of Understanding (MoU) between The University of the West Indies (UWI) and the Association of Caribbean States (ACS), held on October 27, 2020. The MoU, signed in the English, Spanish and French languages, provides a framework for both institutions to cooperate on resource mobilisation, integration and furthering the sustainable development of the Caribbean region. In practical terms, the agreement will allow for the exchange of information, collaboration in organising of conferences and seminars, research and innovation, and training, especially in the areas of: disaster risk reduction, trade, transport, sustainable tourism and the protection of the Caribbean Sea.

Vice-Chancellor Beckles said: “The University of the West Indies is resolute in its agenda to decolonise the structures inherited from history… Only the integration of our Caribbean world can fully unleash the potential of our people. It is our mutual intention to advance the process of regional cooperation and consciousness.”

Noting “this MOU between The UWI and ACS will give greater sustainability to our integration activities,”

Sir Hilary underpinned the centrality of this alignment between The UWI and ACS beyond an English-based framework, and within the context of the greater Caribbean region. He explained that this began with The UWI’s bold move, last year, to forge partnerships with Cuba’s University of Havana and Universidad de los Andes (UNIANDES) in Colombia. It was further cemented with the University of St. Maarten’s incorporation into The UWI system earlier this month. He made special reference to the University’s strategic priority to be multilingual by 2023 as part of the “preparation of an entire generation of students and young people to take command and control of their Caribbean space.”

This signing made The UWI a Social Partner of the ACS. Expounding on the significance, ACS Secretary General Dr. June Soomer said: “As the 13th Social Actor within the ACS, you will be engaging with an organisation that was established in 1994, at the height of the decolonisation process. It was an organisation that CARICOM agreed should be formed as we made our way into the world.”

“I’m very happy today that we are signing this agreement that will give the University the opportunity to engage with us on some very forward-thinking and engaging issues. We have been working with the university on geospatial data management, we have the opportunity to further that engagement, as well as a variety of other areas. Concerted action is about implementation and we have a restructured organisation fit for purpose.”